​Zoar Tournament Protocol:  Each player should arrive in time to check with tournament director, then:  on driving range for ten minutes; on putting green for ten minutes, then to the teebox.   After the round, return signed scorecards to scorekeeper.

​Carts are mandatory in all tournaments.  ​

Spectators may walk, keeping the appropriate social distance from competitors.

DO NOT ARRIVE TOO  EARLY!!!

"No shows" are put on a list and not welcome.

(Zoar, OH)  The only thing better than the weather Sunday afternoon was the play in the final round of the Zoar Memorial.  It is always entertaining golf when the seasoned player and the talented upstarts tee it up in competitive championships.
That was the case at Zoar Golf Club's annual amateur tournament.  Chris Okeson is well known for frequenting the winners circle in Northeast Ohio golf. He had played a superb 5 under par opening round on Saturday in the cold, windy and misty conditions.  On Sunday Okeson (Lyndhurst) posted a one under par, only to be tied by Malone sophomore to be Dylan Kaufman.  Kaufman (Benton) was in the clubhouse with a six under par 66.   Kaufman had gone out in 35 strokes and had a back nine of 31.
The playoff lasted one hole as Kaufman chipped in for birdie to claim the crystal.
Connor Ritter, a junior to be at Sandy Valley High School, was solo third after posting identical 70's.  There was a 3-way tie for fourth place.  Josh Prok (Portage Lakes), Matt Stuart (Bolivar) and Blake Hartford (Spring, Tx) all finished the 36 holes at one under par.
The Senior Division (50+) also featured some fine scoring as Strasburg resident Matt Bitikofer backed up his opening round of 71 with another to claim the title.
Rob Schustrich (Windham) was second at 145 and Brian Beebe (Uniontown) was next with a 146.  Bill Jenkins (Canton) and Brad Baker, (Danville) tied for fourth with 148 strokes.
The Zoar Memorial is held each year over the Memorial Day weekend and honors and remembers players of the past.  This year Greg Goodrich (Dennison) was honored for his many championships earned during the 70's and 80's.  His friend and fellow competitor, the late Roy Kennedy was remembered for his accomplishments as well.  More on those two gentlemen can be found on zoargolf.com. 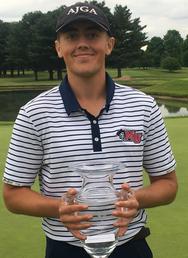 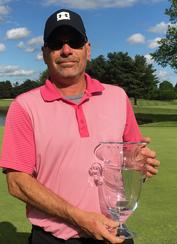