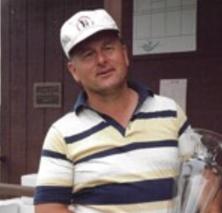 It is with a heavy heart that I write this.  Since there will be no memorial service for Glenn I would like the world to know what he meant to one goofy, golf crazed young man from Fresno that had an idea.

Some friends and I wanted to start an invitational tournament to bring the best players from the state to Coshocton County.  I called golf courses, other tournament directors and publications for names.  When we received the RSVP from Glenn Apple, the locals that new of his reputation were thrilled.  His name lent credibility to what we were trying to do.

The first day of the tournament I rode out on the course to check with the players and Glenn called me over.  "Have you put tournament cups in for today?" he asked.  Never having heard of "tournament cups" I stammered and stuttered for a bit, then he winked, smiled and said, "I only ask because I haven't made a putt yet."   He went on to win the tournament and continued to be a supporter and friend for many years. He talked about the Coshocton Invitational wherever he played and many followed him.  Our success was because of Glenn.

When we started the Zoar Memorial it was an easy choice to honor him the first year.  The following is an excerpt from the press release that year:


Apple’s golf resume speaks for itself:

In Michael Murphy’s book, Golf in the Kingdom, a wife verbalized her take on men and golf.

“It’s a way you’ve found to get together and yet maintain a proper distance.  All the waiting and oohin’ and aahin’ over your shots, all the talk of this one’s drive and that one’s putt, and the other one’s gorgeous swing – What is it all, but love?  Men lovin’ men and that’s what golf is.”

We thank you Glenn for what you gave.  And, we hope we oohed and aahed enough that you knew our love. You play on, we’ll catch up with you on the next tee.